Ruth had to go to Jerusalem to work early in the morning. She was kind enough to let me sleep in, though. I had to return the rental car by noon and we had lunch at an Ethiopian restaurant afterwards.

I took the tram to the ‘French Hill’ to start hitch-hiking to Eilat. There were about 30 young Jews waiting there already. It took me about 1.5 hours to get a ride. Amir drove what must have been the filthiest car I’ve ever seen or been in. He was a nice guy, though, and took me to En Boqeq, a resort town at the Dead Sea. There I was unlucky at first and when it got dark I decided to take the bus instead.

When the bus arrived the driver showed a remarkable rudeness that seems to be typical for quite a part of the (non-Arab) Israeli population. A grumpy ‘no ticket, no seat’ by him and I was back to square one.

I managed to advance a few kilometers to Zohar junction with a guy named Nil, who handed me a beer (he was having one himself, too) when I climbed into his car.

At Zohar junction I was stuck for a while. Traffic was low and nobody stopped. It was around 7.30pm by now. I walked a kilometer or so to a petrol station. Salem, a proud Bedouin working there, helped me by asking the few stopping cars for their direction. He also offered me a lift for a few kilometers should I still be there at his shift’s end. A young Israeli couple stopped and I asked them for a ride. They didn’t speak English and let me tell through Salem that they weren’t going very far from here. As soon as they had left he told me that they were indeed going as far as Eilat…

Well, Salem found me another guy who finally took me down south to my destination. We arrived at 11.40pm, not without me dying a thousand deaths because what’s-his-name was quite tired.

We went to Jerusalem again in the morning and strolled around the Old Town. We were stopped by the police guarding the entrance to the Wailing Wall – it’s Friday and only Muslims are allowed in today. A rude “it’s closed!” sent us into a different direction, a dead-end alley. On our return we wanted to have a little chat with the guards and, pretending to be ignorant in religious matters, ask them why we weren’t allowed in. In English, of course. We had to wait, though, as both guards were busy. One was talking on the phone (with his wife or affair, as Ruth translated for me later) and the other one was sleeping, his head resting on his gun.

We watched them a short while and eventually had to laugh about the scene. The guy woke up and explained – in English – why we couldn’t go in. I jokingly complained that he hadn’t even asked me if I was Muslim. He said he knew I’m not. More chit-chat; and when he asked where we were from and learned that Ruth was Israeli and spoke Hebrew the whole thing got even funnier.

The remainder of the day in a nutshell: We had tea and nargilah in a coffee shop; visited the Jewish part of the Wailing Wall were I got my very own kipa (the tiny Jewish hat); sneaked onto the city wall with the help of a friendly local (Arab); had lunch in East Jerusalem; left the city and drove up a hill to watch the sun set (but it (the sun) somehow played tricks on us); stood by a bonfire with some Israelis of Russian descent and listend to their singing Russian and English-language songs; had dinner in Abu Gosh, a village near Jerusalem famous for its Arab cuisine; drove home with two bottles of wine. 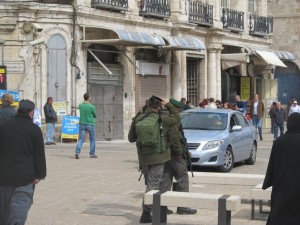 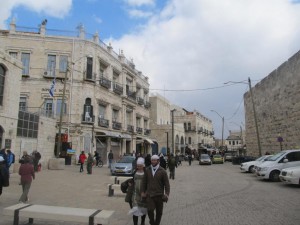 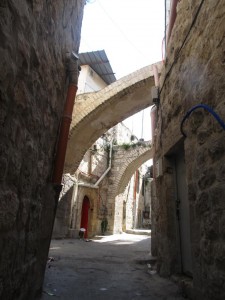 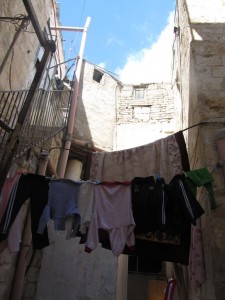 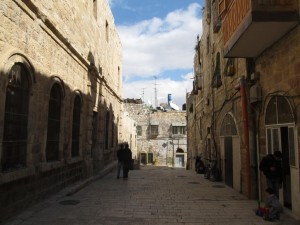 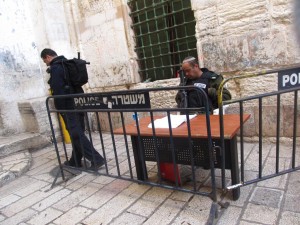 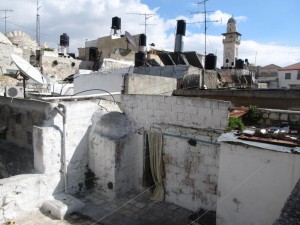 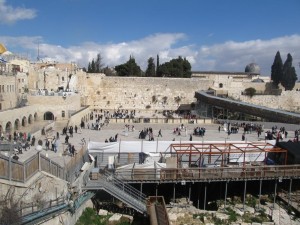 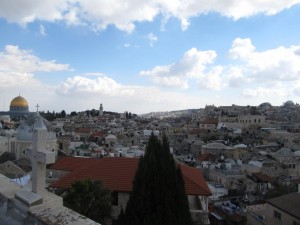 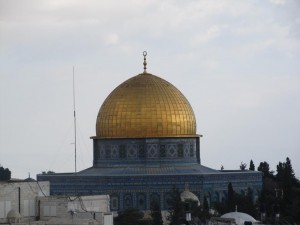 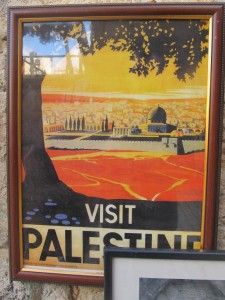 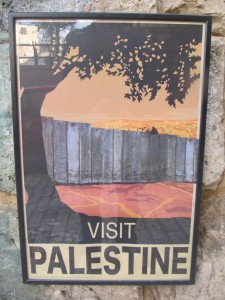 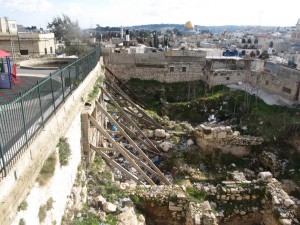 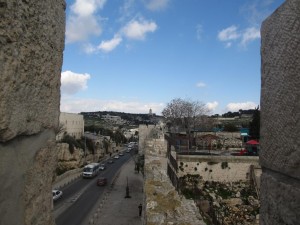 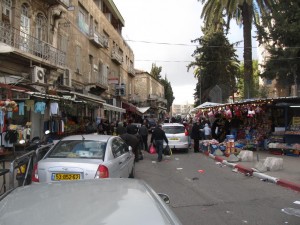 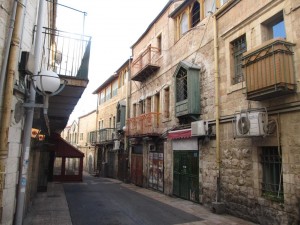 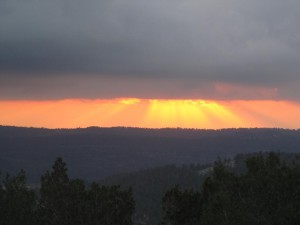 Trip: Into the Lion's Den | Country: Israel, Palestine | Comments Off on Day trip to Jerusalem

In the morning I dropped of my cousin at the airport. She’s flying back home.

Then I continued to Kfar Uriyah, a village near Jerusalem. Alexander knows a girl there who he’d met in Georgia, too. Ruth had offered to host me for a night or two.

The weather wasn’t so great, so we decided to hop into the car and drive into the West Bank. For the uninitiated, Palestine’s status and situation is at best weird. More realistically speaking, the situation is horrible.

We drove to Bethlehem, a zone A area, and sneaked in through a gate without being checked. For me it wasn’t risky at all but Ruth, being Israeli, wasn’t allowed in, obviously, and the consequences would have been sever had she been caught. Tough girl.

We walked around the old town, visited the Nativity Church, and had a look at The Wall.

We left Bethlehem and drove to the Arab/Palestinian village of Al-Walaja nearby. The situation is absurd there. The Wall (or some wall?) is being built around the settlement. There is one house that sits a bit outside the village and hence the wall’s perimeter. That house will get its own wall built around it, and it will be connected to Al-Walaja by a tunnel, which is almost finished.
I think this is a prime example of the stupidity and absurdness of the whole situation, but also of the desperateness and fear on both sides. It is clear that solving this entire mess will be difficult at best.

We drove along the wall around Al-Walaja – only a small portion is finished, the rest is a massive building site -, had a look at the tunnel, were stopped by a Hebrew-speaking guy who told us that we were not allowed to be there (but we both pretended to not understand him), drove on and were stopped again by armed Arab-looking IDF (Israeli Defense Forces) soldiers who made it clear that we would not be able to continue with our car due to the condition of the track. Later Ruth told me they had said the wall is a bad thing (but again we had to pretend not to understand them). To summarize: The Israeli Defense Forces employ Arabs to guard the building site of a wall (which they don’t like) being built around an Arab village to protect Israelis. Hmmmm…

We stopped at a little shop in the village and had a chat with the shopkeeper. Omar was also the Muezzin of Al-Walaja and a nice guy. I bought some cumin from him and in the end he invited us to a coffee.

We drove on to Jerusalem, which wasn’t far, had a look at the movie schedule, decided to get some wine and go home instead, got stuck with the car in a narrow dead-end alley in the old city, managed to free it somehow, and eventually continued chatting at Ruth’s place over tasty dinner, wine, and nargilah. 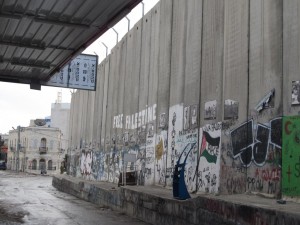 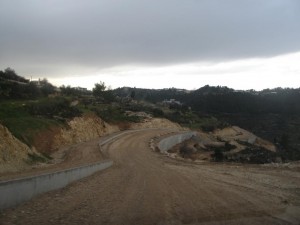 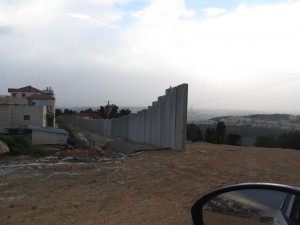 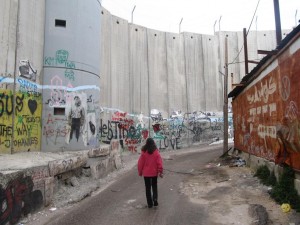 The Wall in Bethlehem 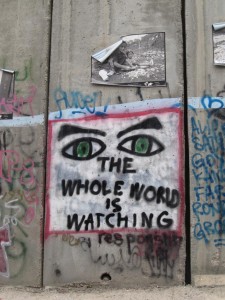 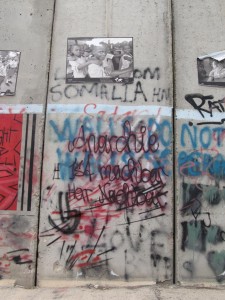 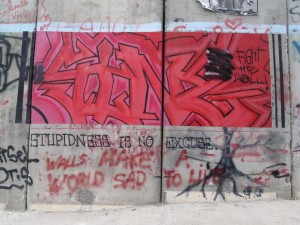 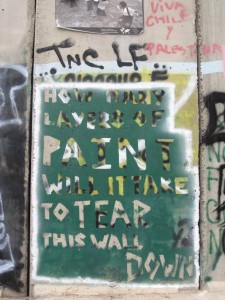 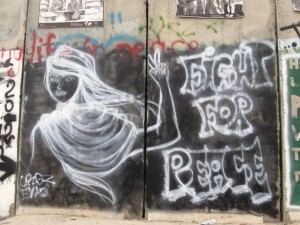 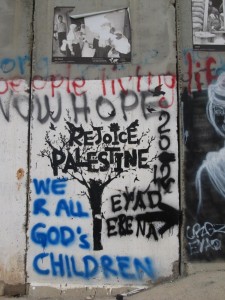 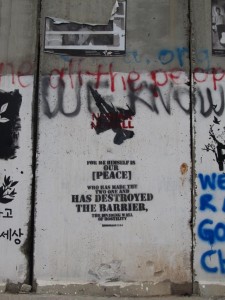 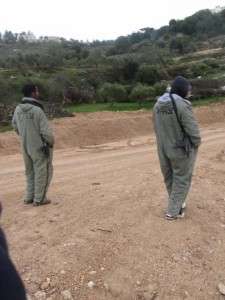 Today’s destination was En Gedi, a … hm, it is difficult to define En Gedi.
It’s three entities sharing the same name though not the same space. It’s a kibbutz, it’s a youth hostel and a field school (whatever that is), it’s a beach at the Dead Sea.

So from Tiberias we drove south, and stopped in the town of Bet She’an, which we had passed through on our way from the Jordanian border to Nazareth. It is home to an archeological site which includes parts of a Roman city, but also settlements from earlier periods. We spent an hour or two there and then drove on into the West Bank, along the river Jordan. As I should learn later, Israelis don’t call the area along this route West Bank at all. For them it’s just the Jordan valley. Indeed, there are only very few (Jewish) settlements along the road, the only notable exception being the city of Jericho.

Near Jericho is the site where John the Baptist allegedly baptised Jesus in the river Jordan. It is possible to visit this place from both sides of the border (the river forms the border between Israel and the Hashemite Kingdom of Jordan here). The river Jordan is a tiny stream, maybe 5 meters wide. As a visitor you can walk right down to the river bank and even into the water as part of a baptism ceremony – closely watched by heavily armed border guards from both countries.

We didn’t stop in Jericho – it didn’t look very inviting for some reason – and instead continued right through to En Gedi and took a bath in the Dead Sea there. That’s actually a funny experience. And the water definitely burns in the eyes and on the lips, as I know now. Submerging the head is not recommended, but definitely worth a try if you’re a little pain-resistent. :)

En Gedi is located just across the southern ‘border’ of the West Bank, in Israel proper. Both at the entrance and the exit the Israeli military has check points, though we were waved right through without any checks at all.

PS: Hoping for a two-state solution, I’m also filing this entry under ‘Palestine’.

The Sea of Galilee with Mt Heron in the background

The Jordan Valley near where the river enters the Dead Sea

Jesus' baptism site at the river Jordan. The country Jordan begins at the other bank.

One of the best-preserved amphitheatres in Israel

Trip: Into the Lion's Den | Country: Israel, Palestine | Comments Off on Tiberias – Bet She’an – En Gedi
On My Todd