The ferry at 9am brought me to Finland proper. I was slow from then on, though, being very tired.
First I went eastwards, and then north. The countryside is flat, with very minor hills, some agriculture and some forests.

I am now in Uusikaupunki (funny name) on a camp site for which I paid 19 Euros. Wait, whaaat?

The weather is crap crap crap. I’d like to go back to the city center, but not in this rain. 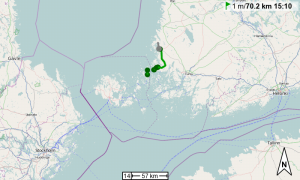 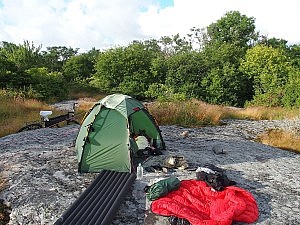 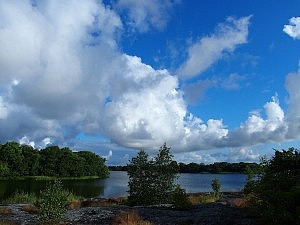 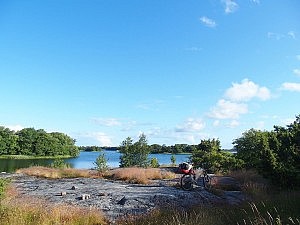 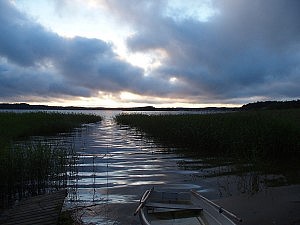 Trip: To the North | Country: Åland Islands, Finland | Comments Off on Island of Långholm – Uusikaupunki

I got up later than planned (7am instead of 6) and found everything infested with slugs, which took some time to get rid of. I left at ten past 8 and rushed down to Grislehamn at the Baltic Sea coast, 34km from camp, to finish the Swedish leg of the trip. The ferry to the Åland Islands left at 10am and I touched base at the ticket booth at exactly 9.30. Not too shabby.

The Ålands are an autonomous (and demilitarized) region of Finland. (And apparently a tax-free shopping haven.) They allegedly consist of ~6000 islands, skerries, and rocks.

I hadn’t had any plans for how to cross the islands, just a bunch of ferry schedules, but seeing that the winds are still perfect for travelling in a northeasterly direction, and seeing the grim faces of the cyclists going in the opposite direction, I decided to cut the visit short and not go any further south (than absolutely necessary). No visit to Mariehamn, no postcards from the Ålands, sorry. I crossed the main island and hopped on another ferry at Hummelvik. I got off at Torsholma and cycled north, towards the last ferry that will bring me to mainland Finland tomorrow.

I pitched tent on a sheltered rock facing the water. When going for a swim I found out that the slopes were so slippery that I almost didn’t get back out of the water. Imagine the headline… :)

Trip: To the North | Country: Åland Islands, Sweden | Comments Off on 10km SE of Hallstavik – Island of Långholm
On My Todd