All night there were people out and about all around my little lake. My neighbours, who’d pitched tents as well, were already gone at half past 5 when I got up. Had a quick swim and breakfast, and left at half past 6.

The quiet roads followed the river Ipoly that also marks the border with Hungary. When I came to the place where I wanted to cross I saw that the bridge was destroyed. It has probably been that way for quite a number of years, that is, since the Cold War or longer. However, on my map there was a track that would somehow connect the two road ends. On the other side stood a man who looked almost as puzzeled as me. My guess is that locals had built a temporary bridge that was washed away by some recent flood. Got to update OpenStreeMap. I thought about wading through but the waters were too deep so regretably I didn’t even try.

Crossed the river (and border) near Balassagyarmat instead. This time it looked more like a proper border, even though the border station was of course abandoned. Decided to trade traffic-free backroads for a shorter distance and continued on M22 towards Vác where I wanted to cross the Danube river by ferry.

Unfortunately, or rather fortunately, M22 turned into M2, and cycling is not allowed on single-digit designated roads. So once more I retreated to the quiet Hungarian back roads that are so great for cycling. M2 goes more or less straight to Vác with long slow climbs and heavy traffic; my little road, on the other hand, was flat and saw very few cars. I ended up in some small village at the Danube. From here it was a pleasant ride along the river to Vác. After crossing the main stream by ferry and a smaller branch by bridge I soon arrived at my brother’s weekend retreat.

Temperatures had peaked at 37°C again (in the sun). 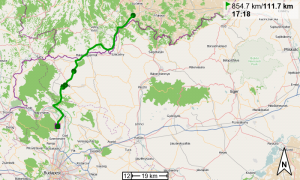 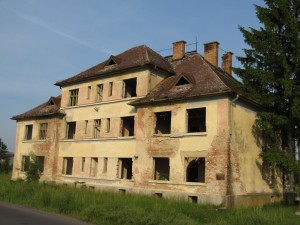 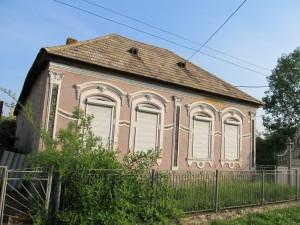 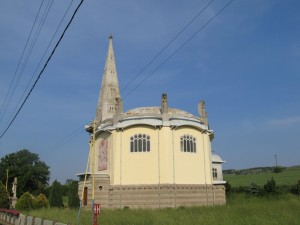 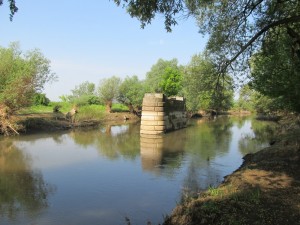 The bridge that wasn't there. The other bank belongs to Hungary. 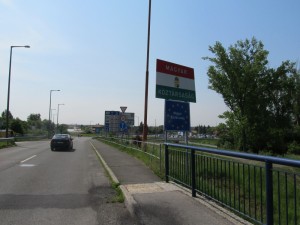 Proper border-crossing into Hungary
Trip: To the Caucasus and Back | Country: Hungary, Slovakia | Comments Off on Vel’ká nad Ipl’om – Leányfalu

Got up at 5am to watch the sun rise from the top of the lookout tower.

From Bankut down to Mályinka was a pleasent 10km downhill ride. Then the terrain was rolling hill-ish, but the road mostly followed the valleys. Cycled towards Ozd on roads that weren’t in OpenStreetMap yet.

Turned south-west in Ozd, to follow the Hungarian-Slovakian border. Crossing it was my primary goal, but there were no paths or roads going to Slovakia for quite some kilometers there. It wasn’t even noon yet but temperatures had already peaked at over 37°C.

At 12:30pm and after exactly 80 kilometers of cycling I finally ended up in the neighbouring country. The border is easy to miss, though. Both countries have implemented the Schengen agreement and there is no visible border anymore (safe for a ‘Welcome to Slovakia’-sign).

Slovakian backroads seem at least as quiet as the hungarian ones, a bit more deteriorating, maybe.
Had a late lunch right outside Fil’akovo. 10 Euros for 3 starters, 1 main dish and drinks – not too bad. Had no Euros and paid in Hungarian Forint – and was ripped off.

Turned south and looked for a lake to have a swim. The first one shown on the map didn’t exist in reality. The second one did, near the village of Vel’ká nad Ipl’om. There’s lots of angling folks here but I managed to find a lovely secluded spot right at the shore. Unfortunately, I don’t have a fishing rod. Anyway, pasta with pesto is yummy, too!

Camping on the visitor's platform

The Hungarian border with Slovakia

Camping in Slovakia
Trip: To the Caucasus and Back | Country: Hungary, Slovakia | Comments Off on Bükk National Park – Vel’ká nad Ipl’om
On My Todd