Didn’t sleep too well. The wind got stronger during the night and shook the tent quite a bit. I woke up with every bigger gust.

Got up shortly after 6am, packed, and had a hasty and disgusting breakfast. By now, I seriously hate that porridge-style stuff that I’ve been having for breakfast for pretty much all of the past 3 months, despite it’s usefulness when cycling.

Left around 7.30. The wind was still blowing strongly straight into my face, but I had all day for the remaining 141km to Ivalo. Got offered a ride to Finland 2km from my campsite but turned it down, I was feeling well enough. The road continued to be pretty flat most of the time and I didn’t see much besides trees along the road (and everywhere else, too) and the water of the Lotta river, shimmering through the branches, which the (quite excellent) road followed. Traffic was negligible. About 15km from the border, however, the road was under construction, and the surface varied from uncompacted sand to uncompacted gravel.

The Russian Customs officer was happy to report that he’d been at a Beck’s beer tasting in Bremen. Border formalities went smoothly on both sides, and I was back in the European Union!

Finland greeted me with rain. A short shower only, fortunately.

The last 50km to Ivalo where quite a windy PITA. I seriously  feel all of the 300km in my legs now. Went to the first supermarket and immediately fell in love with Finland. Like in Russia, one actually has some choice here when shopping. I’m quite happy that Norway is the only exception in that regard. Found a campsite near the town. 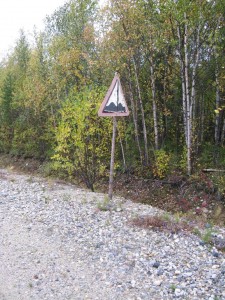 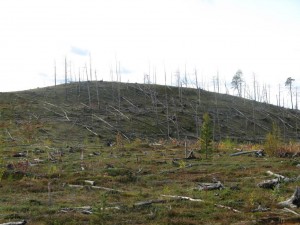 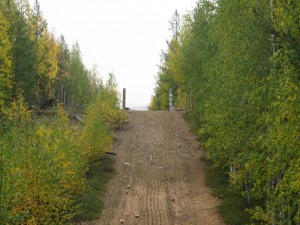 Got up too late for a long cycling day, packed my stuff, had breakfast, and checked out. The girl at the reception didn’t want to put a stamp on the immigration card and instead gave me slip of paper stating I’d stayed at the hotel. I was a bit skeptical, but she said it would be ok at the border.

Cycled out of the city and to the south-west. The terrain was unpleasantly hilly at first and I had a strong head-wind. I came through a couple of run-down, hm, villages? A village, in my book, has small houses, for just a few families each. These places, however, seemed to consist solely of a few of these ugly multi-story concrete buildings, grey in grey, from soviet times. In Тулома (Tuloma) the road-side ‘advertisements’ for the local agricultural company were still using the old soviet emblem and the ‘СССР’ letters.

The terrain got flatter and I rode on and on. After 156km, approximately half the distance between Murmansk and Ivalo, Finland, I found a dry spot to pitch the tent. Everything here is kinda swampy and it took me a while to find a place where I wouldn’t wake up drowned the next day. Went to bed around 11pm. 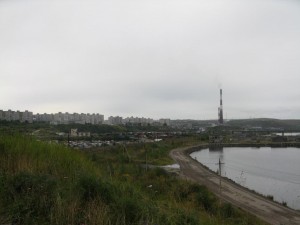 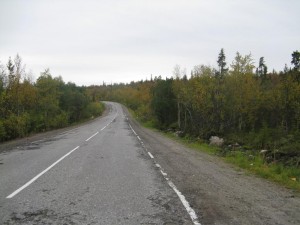 So I spent the past days in Murmansk. I like the city. It’s a bit run-down, but that’s part of its charm, I guess. 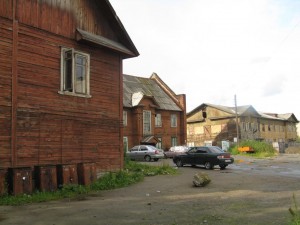 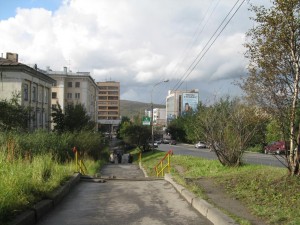 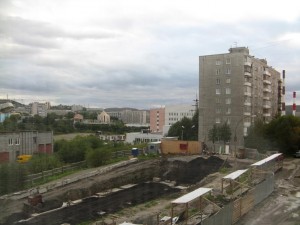 Got up at 6am, left at 7, didn’t feel too well still, rode the bike for a few kilomteres, pushed the bike for a few more kilometers, then cycled again slowly, and finally made it to Murmansk at half past 2, 64km from my last campsite. Checked into a hotel (about a third cheaper yet than in Zapolyarniy), had a nap, dinner, and fixed an appointment for a hair and beard-do tomorrow morning!

Also went to a супермаркет to get some juice and bread and stuff. It is amazing to have some choice again, and at reasonable prices!, after the boring shopping in Norway. The Cold War is over, and the good old СССР is finally being invaded by the US. Coke & Co. are already here.

Woke up too late. Failed to get proper breakfast in the hotel’s restaurant. The waiter offered eggs (in English), and молоко and хлеб (milk and bread, respectively) was the only food I remembered in Russian. So I ended up with 3 eggs with some slices of cooked ham  on top, two half slices of toast, a glass of milk, and a coffee. Topped that up with müsli later.

Left Zapolyarniy around 11am (ouch) with 150-180km (depending on which sign you trusted) to Murmansk. While the weather was unpleasant enough yesterday, there was not a single cloud in the sky this morning. A strong wind was blowing from south-south-west, pushing me towards Печенга (Pechenga) with 30-40kph, the maximum the road’s surface would allow without risking too much. Unfortunately, right outside Pechenga the road turned south/south-east and the wind was now more like a foe than a friend. The hilly countryside didn’t help increase speed, either.

Came to a place called Спутник (Sputnik), just like that satellite the Soviets shot into space back in, ouch, have to look that up. (Edit: Sputnik I was shot into space on October 4th, 1957.) Sputnik, the place, didn’t seem to consist of much more than an Army base, though. Loads of tanks and other military equipment standing around, and the odd soldiers re-painting roadside barriers in black and white. A bit later I heard noises that sounded like shots from big guns. And a bit later yet, a massive tank crossed the road not 50m behind me. The commander(?) greeted. Even further down the road, more tanks stood in formation and were looking like they were ready to fire at some distant target. Or had just done so; maybe it was them I’d heard earlier.

Came to a Sámi-looking, non-military mini-settlement called Титовка (Titovka, any relation to Mr. Titov?), and shortly thereafter to a gate and passport control. The guy there wasn’t bothered by me wearing cap, sun glasses and beard (didn’t want me to take any of that off) and even seemed to try some smalltalk (the language-barrier was to high, though). I definitely expected more trouble from what people had told me.

Loads of people about here collecting mushrooms and picking berries. Cooked some pasta for lunch, tea, dinner, at the roadside. A guy in camouflage stopped to take some of the excess gravel they’d used when building the road and then dumped. He told me in a mix of German, English, and Russian that he’d been in Rostock and Stralsund in then East Germany in 1988, working on a fishing trawler.

After cycling for 99km, I didn’t feel like going on, didn’t feel very well, actually, and it was too late anyway, so I pitched tent a few meters from the road in the woods. I’m not sure whether I was still in restricted area; there still where those funny-looking yellow signs next to the road that I couldn’t quite make any sense of. But since people where walking all over the place collecting stuff, at least mines and shit weren’t an issue. 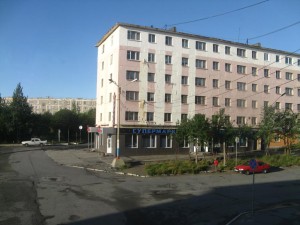 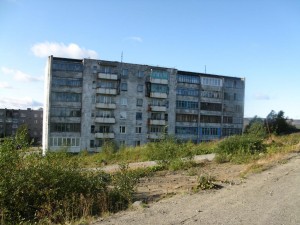 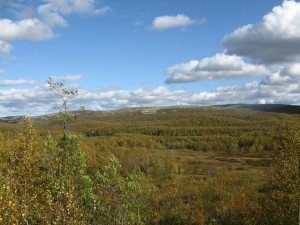 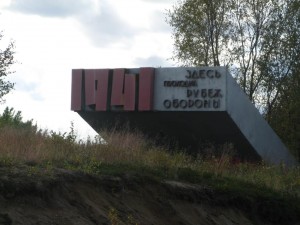 On the left side of the road 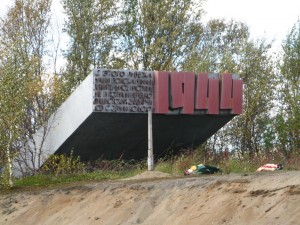 On the right side of the road
Trip: Northern Europe | Country: Russia | Comments Off on Заполярный (Zapolyarniy) – Заполярный + 99km

No rain this morning, yeah!

Clearing Norwegian customs was easy enough. One gate, one guy, one minute, and I was in no-man’s land.

On the Russian side, I got the immigration card at the first gate. Then I had to leave the bike at the second gate, fill in the immigration card, hand it over to some officer along with my passport. It took him ages to give them back to me, and he hardly looked at me at all (I’d thought of getting rid of my beard to make me look more like the photo in my passport, but it didn’t seem to bother him at all). Then the actual customs counter. Nothing to declare, of course. The guy asked me if I’d cycled here from Germany and muttered something into his well-shaven beard when I acknowledged, prolly ‘stupid’ or ‘crazy’, or something along those lines. Same for my where-to. Then we stepped outside and he had a look at the bike. He wasn’t really interested in my bags; all he wanted was alcohol! Regrettably, I hadn’t brought any. He seemed to understand, though, and let me go anyway. The third gate was just for show. I was in Russia.

And Russia greeted me with rain.

First port of call: Никель (Nikel). An ugly assembly of run-down typical Sovjet rectangular multi-story buildings. Next to it, a huge and desolate-looking nickel plant and smelter, with their chimneys rearing their fuming heads high into the sky. The rain and the low-hanging clouds made everything even more depressing.

All of a sudden there she was. A long-legged beauty, standing in the rain at the curb, waiting for some cars to pass so she could cross the road. I felt like ripping off my fake beard, and asking her, begging her, to marry me, if only to get her out of that miserable place. Of course, things weren’t that simple, mostly because the beard wasn’t fake.

Found a bank and pulled a small fortune from the банкомат. Also found a book shop and went in in order to ask for some maps of the region. The lady behind the counter looked at me as if she was about to throw something sharp and heavy at me, and I realized that I was dripping wet, too wet to be allowed anywhere near anything made of paper. So I retreated, from the book shop and from Nikel as well.

The landscape is very hilly and so far was mostly green (pines, etc) and yellow-golden (birches, etc). Here, however, near the nickel plant, the hills were mostly bare and the grey-brownish sand and rock lay open for wind and water to play their mighty games with them. There’s also some black stuff that looked like it used to be, uhm, some sort of plants, maybe. In the last century, maybe. ‘Scorched Earth’ was the first expression that came to my mind.

Zapolyarniy isn’t much different from Nikel. The same type of buildings and a massive nickel plant in the backyard. Checked into a hotel (the hotel?) to get my first registration stamp, and had a 5-course dinner for a very reasonable price.

Some of the Russian which I’ve learned for 6 years back in school, is slowly coming back to me, however. English seems to be helpful only to fill in the most important bits.