I left Dahab at 10am to go to Nuweiba, from where the ferry to Aqaba, Jordan, leaves.

With me in the van were an American girl on leave from her volunteering in the Peace Corps in Kenya, and Laura and Rens, a Dutch couple, who were on a side-trip to Petra in Jordan and also wanted to catch the ferry.

Only minutes before we passed through, an accident had happened at a long down-hill curve, with two trucks crashing into each other head-on. One of the drivers was still stuck in the wreck of his truck and people tried to get him out. Didn’t look good at all. Apparently the right equipment to cut him out was missing. There was nothing we could have done.

In Nuweiba, Laura, Rens and me hurried to the ticket office, only to see it being shut right in front of us. It was time for prayer and lunch. We were told to come back in one hour’s time, at 12.30pm. We had a little snack and were back after exactly one hour. And waited one more hour before the window opened again. Meanwhile we had learned from a friendly police officer that the ferry would leave between 1pm and 2pm. We held the tickets in our hands at quarter to 2pm.

While waiting I had a chat with a Jordanian truck driver. He told me that he paid USD 485 for a ticket for his truck to Jordan, and USD 400 for the trip from there back to Egypt. We paid USD 75 per person for the 3 hours (approx. 80km) of net sailing. He said he’d have to wait for about 3 days because his truck was number 120 in the queue, and the ferry’s capacity is limited to 40 to 45 trucks at a time (and of course it sails only once a day, weather permitting). Unfortunately I didn’t ask what prevented him from transiting through Israel. He also correctly predicted that the ticket seller would return about an hour later than announced. Last but not least he mentioned that Egypt was dangerous currently. I thought he was talking about dangers for tourists, but he said that nobody here would touch a tourist as tourism is too important for the country, especially now during the revolution where you could count foreigners almost on one hand. No, he said that Arabs were targeted by robbers.

Well, the ferry left at 5pm.

On the boat we met Vladimir from Russia, who had brought his bike to cycle around Jordan on his first-ever bike trip before flying to Ukraine, and Nicolas from Argentina.

They both wanted to stay the night in Aqaba as well and we shared a room in a simple hotel downtown. At check-in the guy at the reception bent my passport in an unhealthy way and it broke almost completely. The ID page is is now held by a tiny piece of plastic and will fall out with the next incautious touching. I hope they’ll accept it at the airport and let me leave the country. 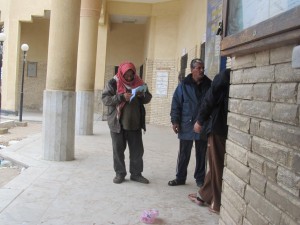 Waiting for the ticket counter to open 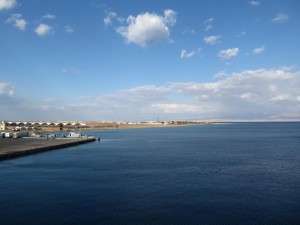 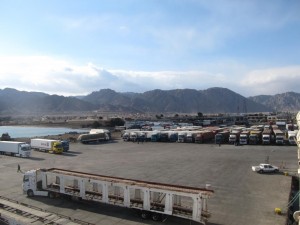 I hadn’t heard back from Ahmad and so decided to skip Cairo, sleep in, and have a late breakfast. The reason why I’m in Suez in the first place is that a friend of mine, Justus, will go through the Suez Canal today in the afternoon. He’s an officer on a container freighter on it’s way to Asia.

Around 11am Justus txted that they were now leaving the Great Bitter Lake as number 3 in a convoy of ships going south.

I tried to call Ahmad to hire him to go north of Suez to see if there was a spot where I could get close to the canal. He said he was at work right now. So it looks like driving a taxi wasn’t his only work.

I checked out of the hotel and waited outside for a taxi with an English-speaking driver who I could explain my plans to. Eventually I gave up and hopped into one where the driver at least seemed to understand where I wanted to go and that he’d have to wait for a while. His quote seemed reasonable.

He dropped me of inside the city, though, near the port. On the river bank soldiers were patrolling and everything was fenced of with barbed wire. No way to get close enough to see or be seen. The driver was ready to leave and return in 2 hours’ time. Not what I had intended…

I was checking the GPS about other possibilities when Mr Mohammed – that’s how he introduced himself – appeared out of nowhere. He knew me from last night already when he had tried to chat me up and sell his taxi services to me. His English was ok and I managed to explain to him where I wanted to go and why. He said that the road north of Suez, which runs very close to the canal, was completely shut off by police and army.

Instead he brought me to a different place where I could get within 10 meters of the water – an army-patrolled barbed wire was the limit again. At least I was standing next to a mosque, a good landmark for Justus.

The first ship of the convoy sneaked past. I learned that what used to be a promenade was now sensitive military area and I was not allowed to take any pictures.

I had been waiting for almost 2 hours already and the patrolling soldiers got a bit nervous about my presence. The third ship in the convoy appeared in the distance when a couple of army officers turned up and started inquiring about my being there. I had clearly been in the area for too long and they had become suspicious of that westerner with the big backpack hanging around an abandoned mosque near the Suez Canal!

Fortunately, that ship coming up was indeed the one I was waiting for. They tensioned when its name matched the one I had mentioned before, but immediately relaxed when they saw a lone figure stand at the side of the bridge returning my waving. I was even allowed to take a few pictures. We tried to shout a few words across the canal, but didn’t understand a thing the other said. I earned some disapproving looks and questions from my army entourage for the noise. Very cool that it was possible to see Justus there, anyway. :)

Mr Mohammed drove me the 500km back to Dahab – the buses still don’t run -, a service I paid dearly for. He, too, chose the longer route around the southern tip of the Sinai instead of going through the interior via St. Catherine. Too dangerous? 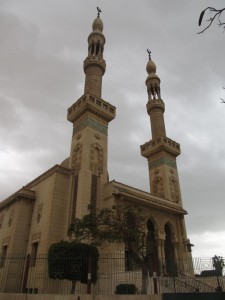 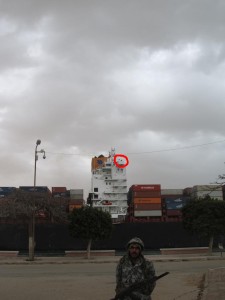 Justus passing by on his ship 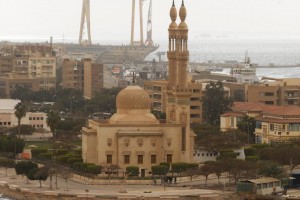 My mosque, my soldiers, and me (photo taken by Justus)
Trip: Into the Lion's Den | Country: Egypt | Comments Off on Suez – Dahab

It was freezing cold at night and my sleeping bag didn’t cope well with the temperatures.
I left Ras Abu Galum at 7am by camel again, then travelled by car to a junction near Suez with Wladimir and his wife. A massive (sand) storm swept over the Sinai today. Visibility was ok most of the time but down to 50m or so twice. The 6-hour trip cost me 100 Pounds (about 12½ Euros) to that point, and one more Pound for a shared taxi to the edge of the city. I started walking towards the center, though without really knowing where the center was. Some random guy stopped me and told me that I should be careful because of “man-catchers” who would be after my money.

I walked on anyway but was still in the outskirts. I didn’t really feel comfortable, even though there was no real reason for that. The locals where friendly and recommended a few hotels. With the help of Ahmad, a taxi driver, I ended up in one of the more expensive places, simply because I wanted wifi… I wrote down his phone number since I’ll need a reliable driver tomorrow.

Later I thought it would be cool to have a quick look at the pyramids near Cairo and tried to contact Ahmad to see if he was available tomorrow morning at 7. I need to be back in Suez in the afternoon. 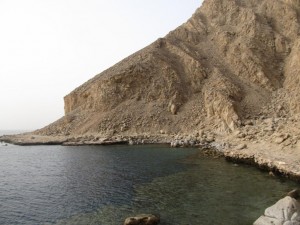 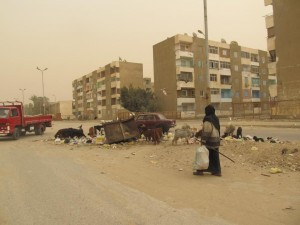 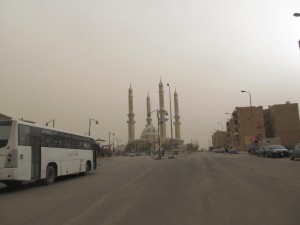 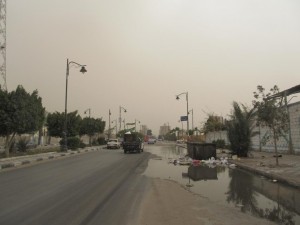 ... and not very pretty.
Trip: Into the Lion's Den | Country: Egypt | Comments Off on Ras Abu Galum – Suez

Together with Wladimir from Germany we rode our camels to Ras Abu Galum for relaxation and snorkeling. Wladimir returned after lunch and I stayed. I climbed one of the hills next to the beach; found some dead camels, dogs and the odd goat’s leg, did some more snorkeling, had a chat with Sadah, my host.

The corals are not as colorful as those in New Caledonia, unfortunately, and there are not as many fish and other animals around. And there don’t seem to be any sharks. :(

I got up early today to be at the Egyptian embassy as early as possible (i.e. 8am) to apply for a visa. The embassy is said to offer same-day service, that is, apply in the morning, pick up visa after noon.

The visa section opened at 9.30 so I had plenty of time to get a passport photo taken and have breakfast. The application process was easy even though the office clerk wanted me to write down that I plan to go to Cairo, never mind that’s not on my itinerary.

When I came back to pick up the visa he fooled me into believing I hadn’t gotten a visa. “This is problem” he said with a serious face, pointing at my worn-out looking passport. Well, he was kidding.

So I took a bus to the border and left Israel at 4pm. Border formalities were painless and nobody cared about my ‘Danger Mines’ sign I had sneaked into my backpack at Jesus’ baptism site at the river Jordan. :)
Egypt greeted me with sunshine – and with a strike. There were no busses going anywhere today or tomorrow.

A taxi driver kind of hassled me from the border to the bus station. He wanted 400 Egyptian Pounds (about 50 Euros) for the 150km trip to Dahab. In the end I paid 200 Pounds. No idea if that’s still a rip-off. Probably it is.

Almost the entire coast from Taba to Dahab is lined with beach-side resorts, hotels, bungalows, and camps of all shapes and sizes. And they’re in every imaginable state of decay. Rotten, unfinished, plain empty, half demolished, some vandalized. Almost none of them sees any guests these days. It was devastating to see, really.

From Dahab I wanted to go to Ras Abu Galum, but that would have involved at least 7km of hiking along the shore and it was already dark when we finally reached Dahab. So I checked into a hotel kind of thing. Very cheap, like almost everything here.

Dahab itself is a horrible tourist trap, though. Souvenir shop next to touristy restaurant for a kilometer or two along the Red Sea shore. Being in that tourist trap I got lured into booking a camel trip to Ras Abu Galum for tomorrow and back the following day. I’ve sat on a camel before, but only for like 10 minutes. I’ll also most likely buy a kilim or two.

Trip: Into the Lion's Den | Country: Egypt, Israel | Comments Off on Eilat – Dahab
On My Todd