I’m taking trains through Denmark today and I’ll sleep in my own bed tonight.

A pretty cool trip, if pretty expensive. Trains in western Europe are not exactly cheap, especially if not pre-booked. It is also slightly annoying to be limited by few connections per day, or even weekly or no connections at all, like in the Baltics and Belarus. Of course, buses to the rescue, if you’re into that mode of transport (I’m not, and they’re not necessarily cheaper).
I don’t think I’ll travel like this again.

The robbery in Minsk and yesterday’s experience in Sweden make for good stories to laugh about.

However, taking the bike – best decision ever. It adds so much mobility that’d simply be impossible to be had otherwise. Yes, it made things more difficult sometimes, but it was well worth the hassle. 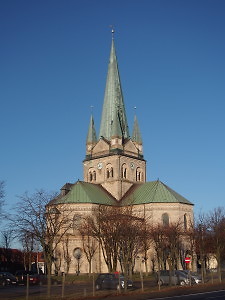 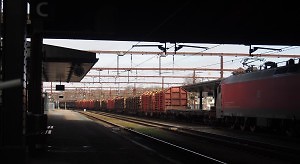 Trip: Bouldering to the North | Country: Denmark | Comments Off on The End

“Don’t argue with me, I’m a female!” (Stockholm – Göteborg – Frederikshavn)

The nice thing about traveling by ferry with a bike is that usually I am the first to board and the first to leave.

So I had solid Swedish soil under my tyres and sped to the train station. I got a ticket for the last available seat on the X2000 to Malmö, took the bike apart (Hello Belarus!), and left Stockholm less than an hour after arriving there.

Then I had the chance to re-rank both Sweden and Belarus in terms of bike-friendliness and conductress-friendliness: The conductress, upon entering the car to check the tickets, got quite upset about the bike.

She said bikes were forbidden to be taken on board, unless taken apart and wrapped. I had asked in Stockholm when buying the ticket and had received an OK. She said that by buying a ticket I had agreed to SJ’s (the train company) terms of service, which state the wrapping is required. That is not entirely correct, because nobody had even shown me their terms of service, of course. She cut me off mid-sentence. She said that the bike was a safety hazard in case we had an accident. I pointed out that neither did I want to be hit by any of my fellow travelers’ hard-top cases. Tucking the bike in some corner or locking it to a spare table (for wheelchair users; none aboard) wasn’t an option for her either.

Then the discussion took a most unpleasant turn:

“Are you making it more difficult for me because I’m a foreigner?” Unfortunately, I didn’t say this.

To make it clear again, I was ‘arguing’ because I had paid 750 Swedish kronor (~80 Euros) for a valid ticket, and I had checked in Stockholm whether taking the bike like this was ok. Now she tells me I have to leave the train and buy a new ticket if I manage to wrap the bike and take the next train. So I am losing both time and money. Instead of killing the conversation with such a ridiculous kill-all question she could have offered a solution. Because, is that really the standard we have reached in society? Do I have to obey every female now simply because they’re a female? This is a stupid and dangerous development.

Well, I had to leave the train at Norrköping, somewhere between the middle of nowhere and the end of the world (i.e., not far from Stockholm). When I was about to disembark, people came forward and apologized for the hassle. One suggested I throw the bike away to be able to continue traveling. Yes, thank you, I see you fully understood the problem.

What is wrong with this country? There are numerous cycle tourists traveling in Sweden every year, and it is impossible to quickly take a bike on a train??? Even a proper folding bicycle has to be wrapped in a ‘protective case’, whatever that is and whoever or whatever it is supposed to protect. And what’s with the weird attitude?

I was unable to find a suitable cardboard box in the sleepy town of Norrköping at 8.30 in the morning. It is also impossible to take bikes on SJ’s regional trains. So the only option was the bus. This is how I got to Göteborg, fortunately a port city with frequent ferry connections to Denmark. The original plan had been to be home tonight. I scratched that.

Well, I apologize to Belarus and all Belarusians for previously calling their country the most bike-unfriendly one. Sweden just took over that title with flying colors. And it is also the first country where I have been confronted with this new social mis-development of weirdly misguided feminism, even though I am sure society is just as f*cked up in other places as well.

I did get a full refund of the train ticket in Göteborg thanks to SJ’s unfriendly but fair José. However, that still leaves me with an additional ferry crossing and hotel to pay for, an additional day of traveling, and a lot of annoyance.

I feel like avoiding Sweden in the future, I am so fed up. But I guess that will go away after a good night’s sleep. I’ll avoid SJ for sure, though.

I’ve crossed the Kattegat already and am in Frederikshavn, northern Denmark, now. 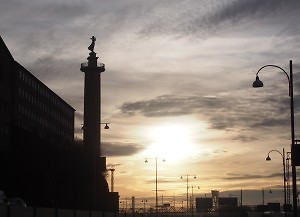 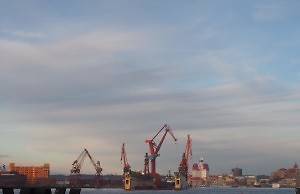 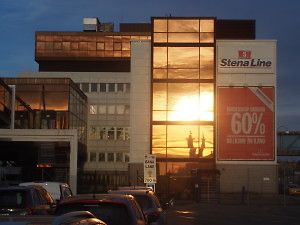 Trip: Bouldering to the North | Country: Denmark, Sweden | Comments Off on “Don’t argue with me, I’m a female!” (Stockholm – Göteborg – Frederikshavn)

A few days ago, Freja and Andreas had suggested to go to Jutland (the mainland part of Denmark) via the islands south of Fyn instead of Fyn itself. Since I hadn’t found a couch to surf in either Kolding or Vejle, and since I’d thought about cutting the trip a bit short for various other reasons anyway, I’d decided to go for that island-hopping route.

Had breakfast with Helle and Louise and chatted with ’em for a bit too long so that I missed the ferry that would bring me from Svendborg to Ærø. Instead, Louise gave me a brief tour of their school.

I then changed the plans for the remainder of the tour entirely. Took a ferry from Bøjden to the island of Als, had a look at beautiful Sønderborg, cycled along the northern shore of the Flensburg Fjord, and crossed into Germany at border stone No. 1 of the German-Danish border.

On the last stretch before the border my router (openrouteservice.org) had a little easter egg for me: uncompacted gravel up a steep hill that was impossible to climb on my bike. I had to push it for the second and last time.

Cycled into Flensburg from where I took a train back home. 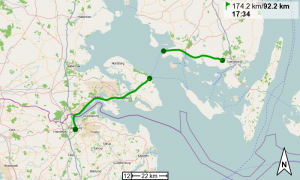 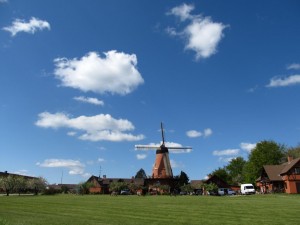 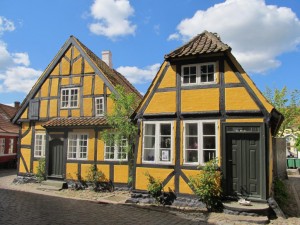 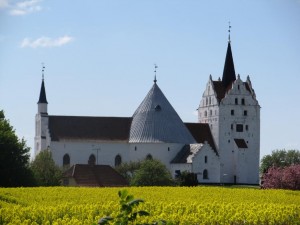 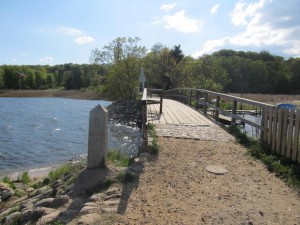 Left Anders’ place around quarter past ten, with approx. 140 kilometers of cycling ahead, the longest stretch of this trip. From Næstved I went south to Vordingborg, where I crossed to the island of Falster over the Storstrøm Bridge, then on to Nykøbing, where the only crossing to Lolland exists that can be cycled.

The weather was still beautiful and so far the wind has been a good friend, too, blowing from northish directions. In Nykøbing my direction of travel changed to west and it got even worse in the town of Maribo from where I was headed north-westish.

Near Nakskov I got lost for a few minutes when I followed the cycle route signs leading to Tårs port (where the ferry to Langeland leaves) instead of my map. When I finally arrived at the port, I saw the ferry close its hatches and the friendly lady at the ticket counter noted dryly that I could now relax for an hour.

Reached Ollerup, near Svendborg, at half past 7pm where I met Helle and her friends/housemates, my CS hosts for the night. They’re a bunch of most lovely people and I felt welcome and at home instantly. Went dumpster diving with the girls after a tasty dinner. 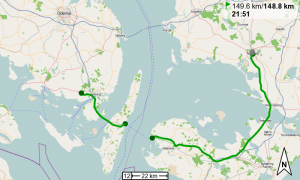 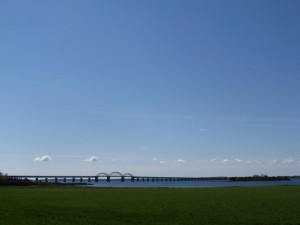 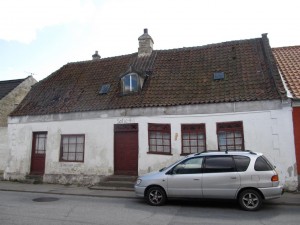 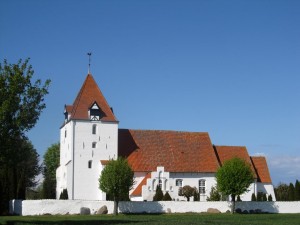 From Copenhagen I cycled along the Bay of Køge down to the town of Køge, where I had lunch and then changed to a more Eastish direction towards Næstved.

Arrived there around 7pm and met up with Anders, my CS host. Had a great time swapping travel stories, drinking beer and playing Portals 2 until late. 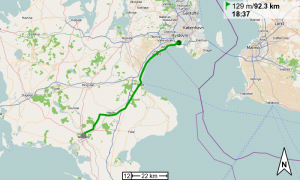 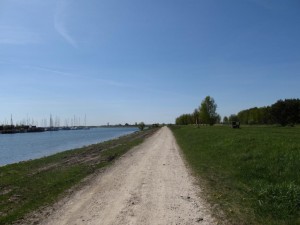 Along the bay of Køge 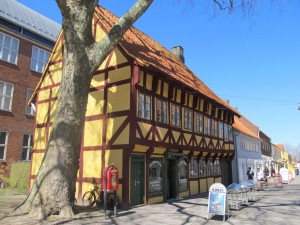 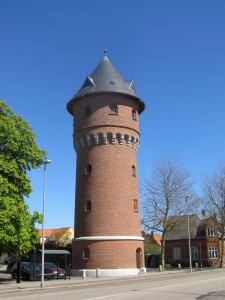 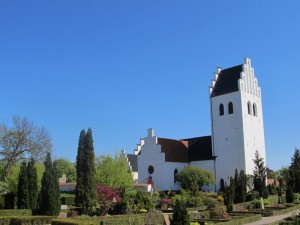 Had breakfast with staff and students of the school and then left for Copenhagen.

The ride was a bit of a pain due to the route and a nasty headwind. It’s about 35km from Roskilde to the capital, on a pretty much straight major road with almost nothing interesting to see left and right.

Met my cousin and her friend again who came over from Lund to visit CPH, too. So we spent the afternoon in this lovely city. Christiania, the free state, was closed due to protests against CPH’s government’s attempts to ‘normalize’ life there.

The Danes ride more stylish bikes than the Swedes. 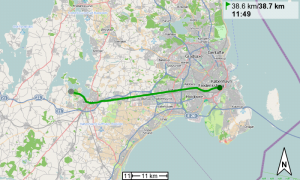 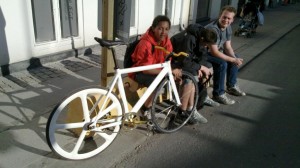 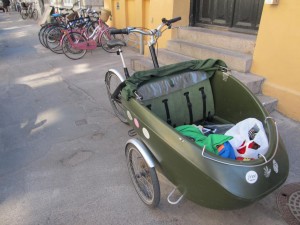 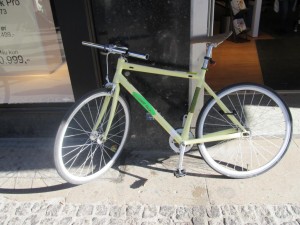 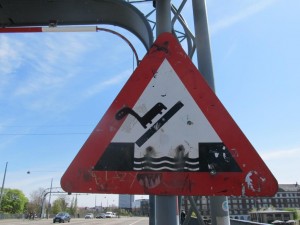 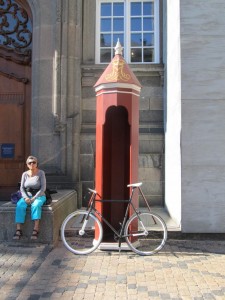 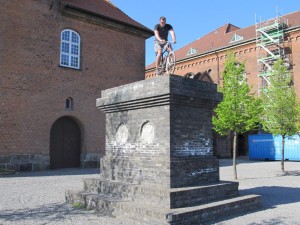 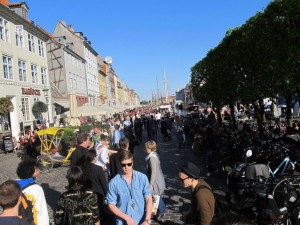 Left the Train Hostel at quarter past ten, got breakfast from a supermarket, and cycled towards Helsingborg where I wanted to cross the Øresund to Denmark.

There is a new bridge (well, opened in 2000) across the sund that connects Malmö and Copenhagen, but cyclists are not allowed there. So I’m forced to make a detour of 100+ km. Well, I don’t mind the detour, of course. That way I get so see Zealand’s north.

South-western Sweden is nice, if a tad boring. After crossing the sund (a ferry ride of 20 minutes), the countryside gets a wee bit hillier and more interesting.

I tried to avoid the main roads were possible (and sensible) and found myself on narrow backroads running through lovely landscape.

I’m couchsurfing near Roskilde with Eugenija, who is a coach and coordinator for a group of volunteers, and works (and lives) at a school for kids with special needs.

Tea time, in the woods south-east of Helsingør
Trip: Going Home via Denmark | Country: Denmark, Sweden | Comments Off on Lund – Roskilde
On My Todd