A short walk/climb up An Stac, an 814m hill not far from here.

It was chilly as I approached the hill from the north-east, in the shade. The sun was already past the zenith – I started the walk in the early afternoon. In some sections near the summit I had to use my hands to scramble a few metres, but mostly it was an easy’ish walk.

The view from the top was spectacular, though, as you can see below.

I descended on the ‘sunny’ side and was back down at the road long after nightfall. 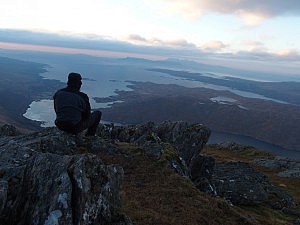 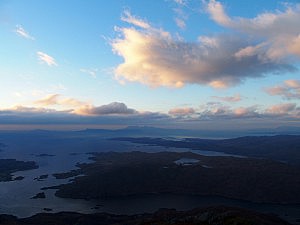 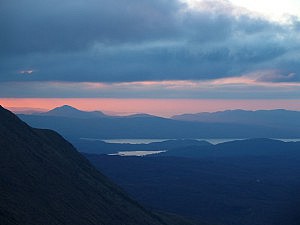 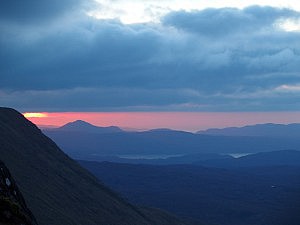 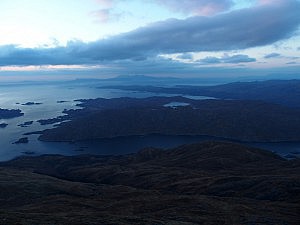 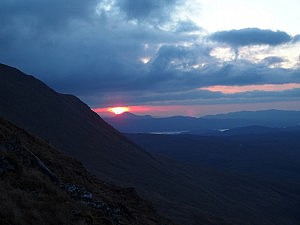 Trip: Day Trips | Country: Scotland | Comments Off on Up An Stac

The weather wasn’t particularly great and I couldn’t see any of the hill-tops around me, they were all covered in a dense layer of grey clouds. So I also didn’t see that they were all properly snow-covered (though I guessed that from the snow patches on the hillsides – and the time of year). I had a good map, compass, and GPS with me, though.

I parked on the central car park of the Glenshee ski area and walked down the A93 to begin my walk with the ascent of Creag Leacach. In hindsight, following the descending road south added an unnecessary climb to the walk. If memory serves right, some of this could have been avoided by leaving the road quite early on and crossing over to Creag Leacach’s base via a parallel ridge. Anyway, whether that would have been faster is an entirely different question. And the ascent wasn’t so bad in the end.

Visibility soon went downhill while I walked up. Interestingly, the boundary between the council of Angus and the council of Perth and Kinross follows the crest between the peaks of Creag Leacach and Glas Maol (and from there the boundary between Kinross and Perth and Aberdeenshire follows over to Cairn of Claise and Tolmount), and additionally, is marked by a somewhat derelict drywall. This wall was visible for the last part of the way up to Creag Leacach already, and was easily followed thereafter as well, as it’s crown often peeked through the snow.

Not far from Glas Maol my path was crossed by a kind of snow mobile which was unexpected and faded away in the fog as quickly as it had emerged, but reminded me that Glenshee is a ski resort.

Both Creag Leacach and Glas Maol were easily reached. From the latter, however, it became more difficult to march on. Owing to white clouds on white snow, visibility was seriously poor and at some point both compass and GPS started to display gibberish. I was indeed lucky that there was snow, which allowed me to retrace my steps.

Having lost quite some time trying to find my way, I decided to call it a day. Walking towards the other Munros would have led me further away from the road and given the weather conditions and the flaky navigational aids that didn’t seem like an exceptionally smart thing to do. I descended close to the ski slopes and wished I’d had a snowboard with me.

The summit of Creag Leacach

Blue sky over Glas Maol for a split second

The summit of Glas Maol
Trip: Day Trips | Country: Scotland | Comments Off on Creag Leacach and Glas Maol
On My Todd