As I mentioned earlier, Cyprus is divided in two parts. The UN has a peacekeepig mission here to keep the Turkish and Greek sides apart. Famagusta is located very close to the border, and on the map it looks like about half the city is military no-man’s land. Last night I accidentally ended up close to the deserted quarters – the empty houses look quite eerie in the evening sun.

Today I crossed the border into ‘Cyprus proper’. It involved getting an exit stamp on the Northern Cyprus side, and a quick glance at my ID on the southern side. Welcome to the EU, finally and for real!

The ride went along the border for a couple of kilometers and past another village in no-man’s land that had become victim of the fights between Turkish and Greek Cypriots and subsequently had been abandoned.

Finding a hotel in Larnaca was a bit of a challenge as most centrally located ones where booked out. I’m now staying in an EasyHotel, an EasyJet off-spring. Just like with the airline, you pay for everything extra, even TV… 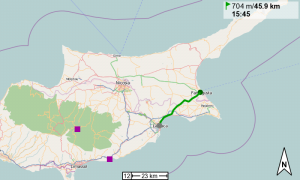 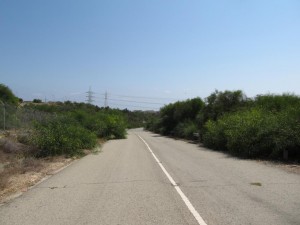 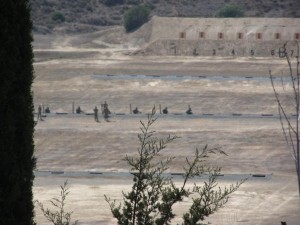 Military shooting range at Dhekelia base 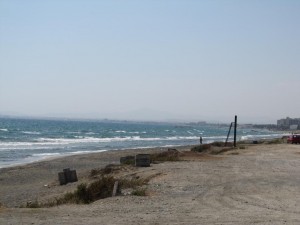 Larnaca in the distance 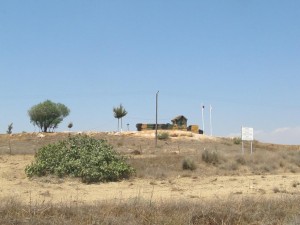 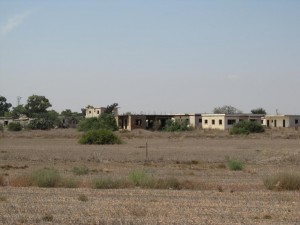 Abandoned village in the buffer zone
Trip: To the Caucasus and Back | Country: Cyprus, Northern Cyprus | Comments Off on Gazimaǧusa/Famagusta – Larnaca

I spent the latst 48 hours mostly inside, trying to get rid of that stomach bug I must have contracted in Hawler/Arbil, Iraq. It made me feel both hungry and sick at the same time during the last weeks and probably contributed to my overall not-so-fit-ness.

Today I set out to conquer Cyprus’ north coast. It was my plan to go about 50 kilometers to the east. Instead I cycled a bit more and ended up in Gazimaǧusa, aka Famagusta, in the southeast of the island.

Cyprus looks a bit like southern Spain, with yellowish hills, and olive groves and pine trees scattered around. Oh, and then there are those ‘villa villages’, newly built luxury communities (“Private Property! Keep Out!”) where one house looks like the other. Some of them were not even finished and have already been abandoned and now rot away.

After 40km I turned south and crossed a narrow chain of hills that stretches along the northern coast. From there the countryside was pretty flat.

Gazimaǧusa looks like a fun town to be in, but it was getting dark when I arrived and I was tired and I didn’t see much of it. 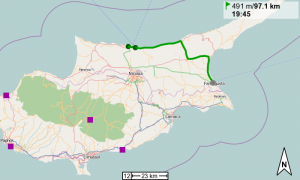 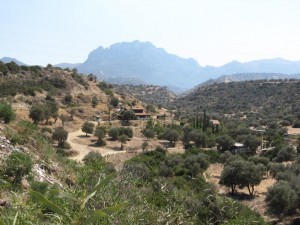 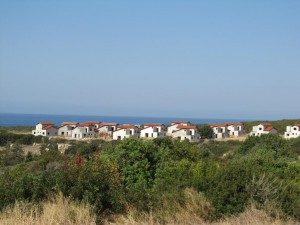 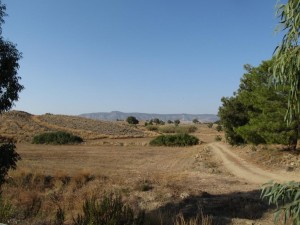 Trip: To the Caucasus and Back | Country: Northern Cyprus | Comments Off on Girne/Kyrenia – Gazimaǧusa/Famagusta

The night was pretty rough. It was hot inside the tent and I discovered too late that outside there where too many biting insects to leave the door open.

I woke up before sunrise and watched it appear over the turquoise waters. First order of the day: swimming. Then: fixing the next flat tire. Another swim after breakfast.

Then I backtracked a few kilometers to the town of Taşucu to board the ferry to Cyprus.

Two hours later I was back in the EU! Hm, almost.

The island of Cyprus is home to two countries, but ‘country’ may not be the right word for Northern Cyprus.
After some clashes between the Greek Cypriot majority and the Turkish Cypriot minority in the 1970s, the northern part, then occupied by Turkey, declared itself the Turkish Republic of Northern Cyprus (TRNC) in 1983. So far, only Turkey recognizes the TRNC as an independent country. That leads to an interesting fact: The Republic of Cyprus (the southern part) is considered by everyone else, including EU and UN, as the country that has control over all of (the island of) Cyprus.
So, while I’m in the EU from the EU’s point of view, I’m not from the local government’s one.

I’m in Girne/Kyrenia, where the ferry dropped me off. It’s hot here.

Sunrise over the Mediterranean

Girne/Kyrenia
Trip: To the Caucasus and Back | Country: Northern Cyprus, Turkey | Comments Off on Taşucu – Girne/Kyrenia
On My Todd